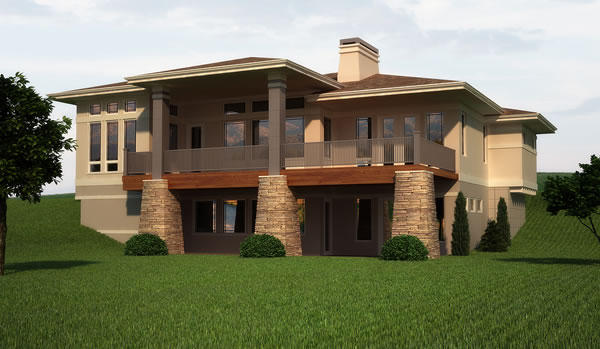 As you approach the house, the low–pitched roofs and wide overhangs give it a “prairie style” look. The covered front porch has its own roof supported by two massive tapered columns with matching planter boxes in front of them. As you step into the foyer, you’re looking into and through the great room to the covered deck at the rear and the view beyond it. Just to your left, a pair of doors open to a study that could of course be used as an office or a den. Three 6’–tall windows provide abundant natural light as well as views to the front.

As you move further into the house, you pass an open stairwell with railings on two sides on your left and a hallway on your right before entering the great room. The far wall is lined with 6’–tall windows topped by 2’–tall transoms. There’s a large fireplace on the left with built–in cabinets next to it, and on the right an angled peninsula counter is all that separates the great room from the kitchen. A window in one corner widens the view and looks into an open deck, and on the other side of the windows near the casual dining nook a glass door opens to the covered deck space. This deck is 23’–wide and 12’–deep, so there’s plenty of room for entertaining guests or simply enjoying the outdoors.

The kitchen and sunny nook are open to each other. As mentioned previously, the 12′ ceiling in the great room drops to a cozier 9′ in the kitchen, but rises to 12′ again in the nook. The kitchen has a large and unusually shaped island with a range and a vegetable sink on top, a walk–in pantry in one corner, and an angled countertop with a raised outer edge for casual eating or serving. An opening leads through a butler’s station to a hallway, providing a second path to the kitchen area.

This same hallway leads from the foyer to a second bedroom with a full bath and a walk–in closet, and a powder room, before reaching a room which functions as both a laundry and a mudroom. In addition to laundry facilities, there is a built–in bench next to some lockers, a wide coat closet, a built–in desk beneath a pair of windows, and a door that opens to a three–car garage that could easily be shortened if you only need room for two vehicles.

A small vestibule next to the fireplace in the great room provides access to the master suite. The far wall in the bedroom has two windows flanking the bed area, a fireplace on the opposite wall, and two more windows flank sliding glass doors that open to a large open deck. A short hall with a barrel ceiling passes between two walk–in closets (guess who gets the larger one!) before entering the master bath. There is a large soaking tub surrounded by flat surfaces and framed by columns that sits beneath two large windows at the far end, a spacious shower with a drying off space, two completely separated vanities, and a private toilet.

All the rooms on the lower level have 9’9″ ceilings. At the bottom of the stairs there’s a large recreation area with views to the rear, a full bar, and a fireplace. There is a full bath behind the bar, across from a room that can be used as a bedroom, a craft room, or an office. A pair of doors on the other side of the bar open to a 17’x21′ home theater room. Just off the recreation area on the opposite side, a door next to the fireplace opens to a guest bedroom with a full bath, a trio of windows with views to the side, and sliding glass doors flanked by windows that open to a wide covered patio. The patio can be accessed from the rec room as well. Unfinished storage space fills the remainder of the lower level.

Front Elevation For One Story Contemporary

Rear Elevation For One Story Contemporary

Side 1 Elevation For One Story Contemporary

Side 2 Elevation For One Story Contemporary

This handsome one–story home can be constructed with or without a lower level. The understated front facade gives no indication of the extraordinary views to the rear. This unique house has different ceiling heights throughout, giving each room a different look and feel. They vary from 9′ in the kitchen, study and second bedroom, to 10′ in the master suite, to a dramatic 12′ in the foyer, great room, dining nook, and the covered deck at the rear. There are two bedrooms on the main level, and if you choose to build the lower level there’s room for two additional bedrooms, a large recreation area, and a home theater.