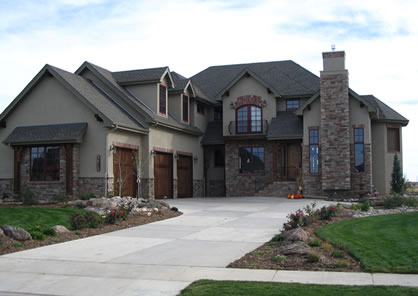 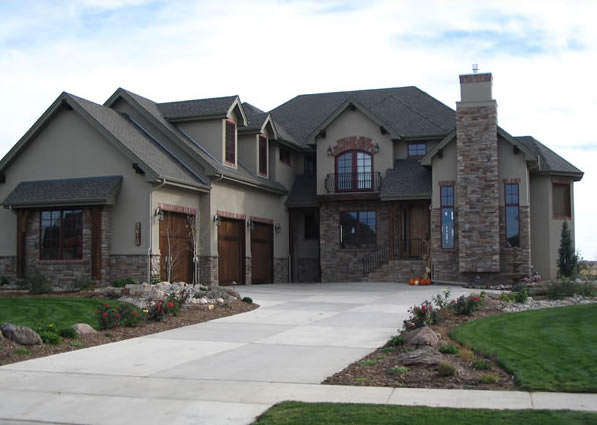 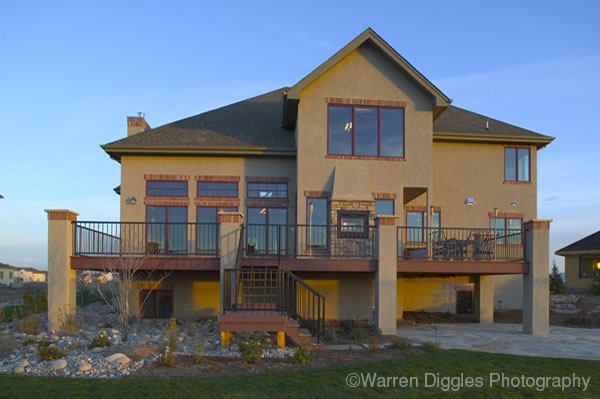 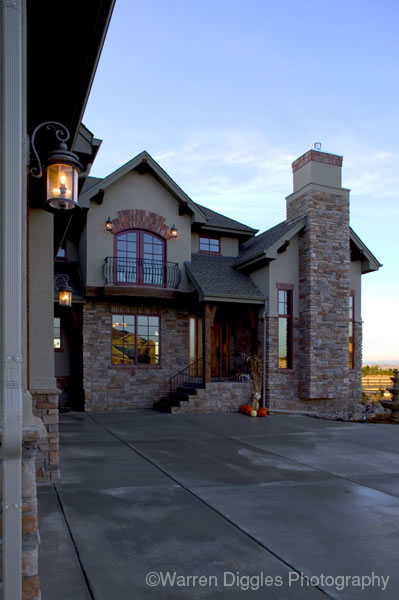 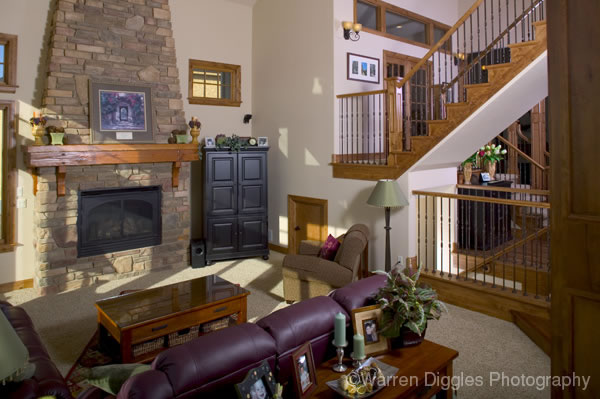 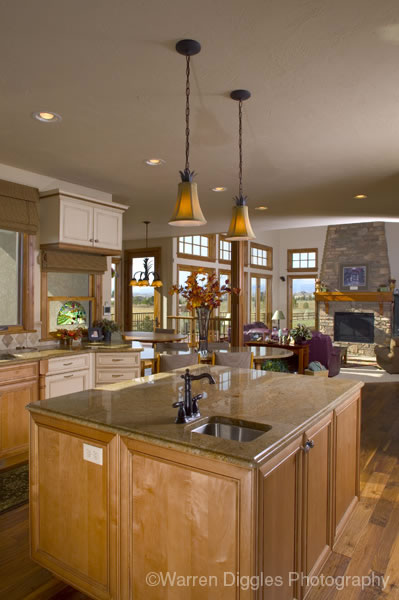 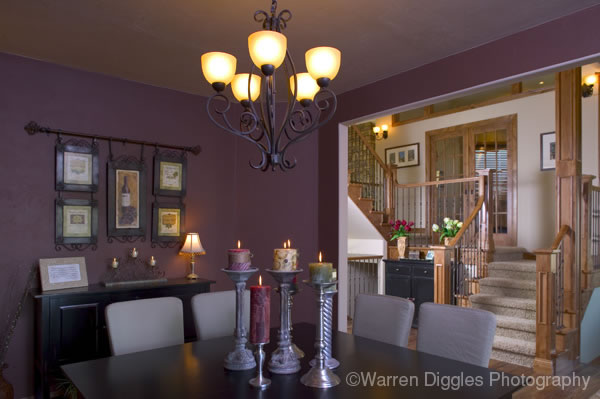 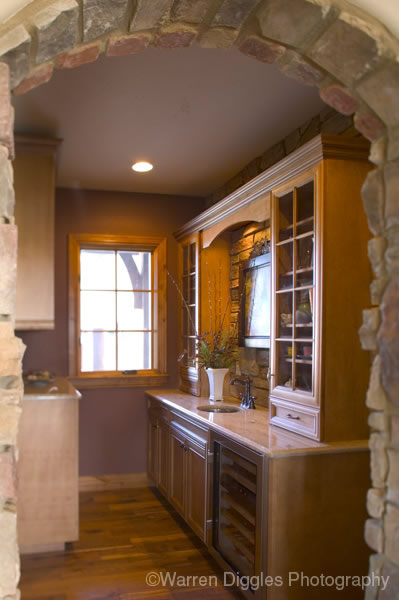 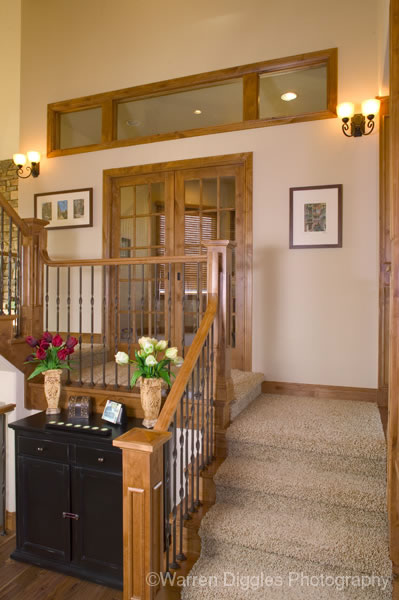 As you step through the front door at the covered entry, you enter a foyer with a dramatic 18′ ceiling. On your right, two stairs step down to a sunken living room with a ceiling that rises from 13′ at the edges to nearly 17′ in the center, crossed by exposed beams that are 15′ off the floor. There’s a fireplace flanked by tall narrow windows that look out to the front, and a pair of large windows with views to the side.

The foyer is open to the dining room, separated visually by a dropped beam clad in wood and a change in ceiling height to 9′. The dining room has all four corners clipped off – creating a much more interesting look and feel – and the ceiling is criss–crossed by decorative wood–clad beams. A 6′ by 6′ window facing the front provides views along with plenty of natural light. Cased openings in the dining room and the kitchen provide access to a very large butlery with a sink beneath a window, plenty of counter space, an under–the–counter refrigerator, and a deep walk–in pantry.

The kitchen is quite spacious, and like most of the rooms on the main level it has a 9′ ceiling. It has a large center island, windows above the sinks that look out to and through a portion of the rear deck, another window with a convenient pass–thru to the grill area on the deck, and an angled peninsula counter that’s open below for seating. There’s a sunny nook on the other side of the counter that has a fireplace flanked by large windows, and a glazed door that opens to the deck area. Another cased opening in the kitchen provides access to a large mudroom with a built–in bench, a built–in desk with cabinets above, and a coat closet, and doors on either end open to the laundry room and the shop area that’s part of the 3–car garage.

As you pass the nook there’s a guest powder room on your right, and a sunken family room straight ahead. The ceiling in this room has a flat area that’s set at 10′ that descends until it reaches the outer walls. On the far wall there’s a large fireplace flanked by built–in cabinets with windows above them, and the wall facing the rear is composed almost entirely of glass, with transoms above the tall windows.

Stairs off the foyer lead to a wide landing where sliding glass doors with transom windows above open to the study. The ceiling is set at 10′ in this room, and three pairs of wide windows in angled walls provide terrific views along with lots of natural light. The angled walls mimic those in the dining room. You’ll see that these angled walls are repeated a number of times on the upper level as well.

This becomes apparent as soon as you reach the landing on the upper level, where four such angles create a visual diamond shaped space. To your left a railing looks down to the foyer, while on your right a pair of doors open to the master suite. The ceiling in the bedroom is vaulted in the center, dropping to 8′ at the outer walls. The far wall has three side–by–side windows for light and views to the rear, and there’s another window in a corner that widens the view. A short hall passes two walk–in closets on either side (with “hers” clearly being the larger of the two!) before entering the bath area. There’s a soaking tub beneath four windows in one corner, a shower in another, two separated vanities, and a private toilet in the master bath.

A corridor off the landing provides access to three additional bedrooms. Like all of the spaces on this level other than the master bedroom, the ceilings are set at 8′. Bedroom 2 has its own bath, while 3 and 4 share one that’s located between them. Bedroom 2 also has a walk–in closet, and a pair of glass doors that open to a small private balcony. Bedrooms 3 and 4 have opposite side views, and a door in bedroom 4 opens to an optional bonus space above the garage that would be formed by the use of attic trusses.

The foundation plans show an unfinished basement, should you choose to construct a lower level. If you don’t need a basement, the space under the stairs to the upper level could be turned into a deep coat and storage closet.

Side 1 Elevation For Huge Rear Deck

Side 2 Elevation For Huge Rear Deck

The exterior of this handsome home is comprised of thick stucco and synthetic stone. It has great views to the rear, and a deck to enjoy these views that is nearly 44′ wide and ranges from 14′ to 20′ in depth. Some of its unique features include a sunken living room and family room, a sunny study off the landing between floors, vaulted ceilings in the foyer, living room, and the master bedroom, and a garage large enough for three vehicles and a shop.