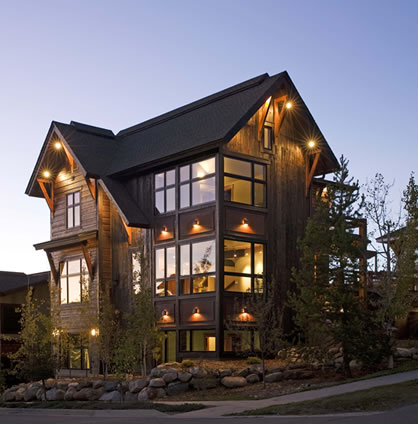 Floor Plans 1 For Rustic Yet Elegant 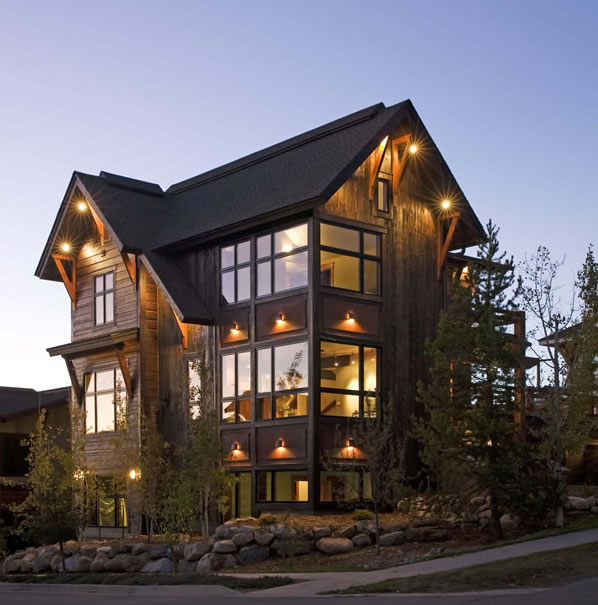 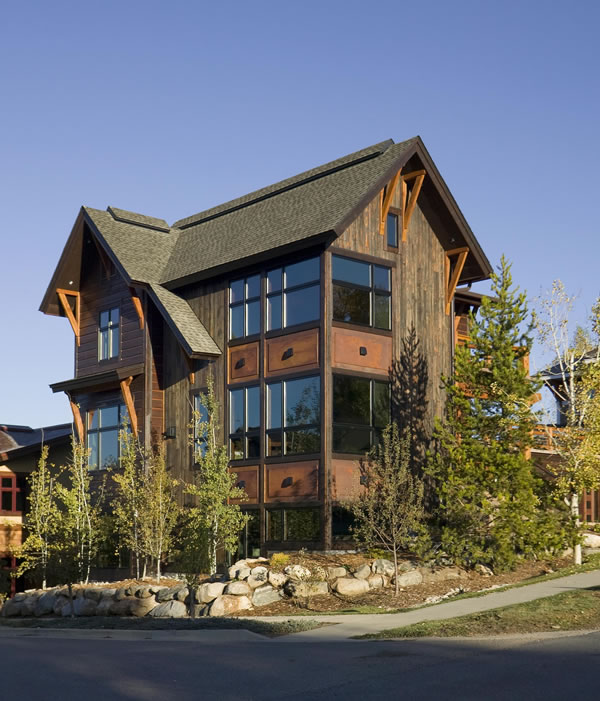 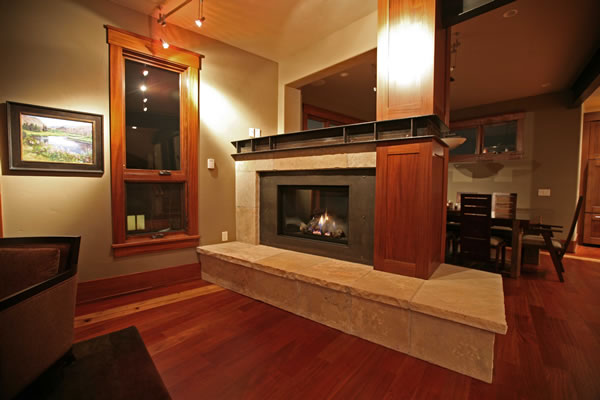 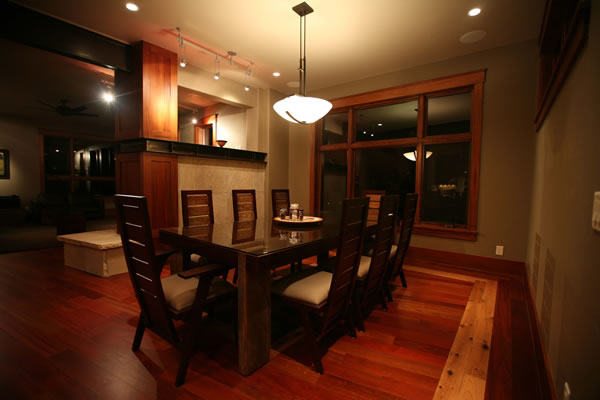 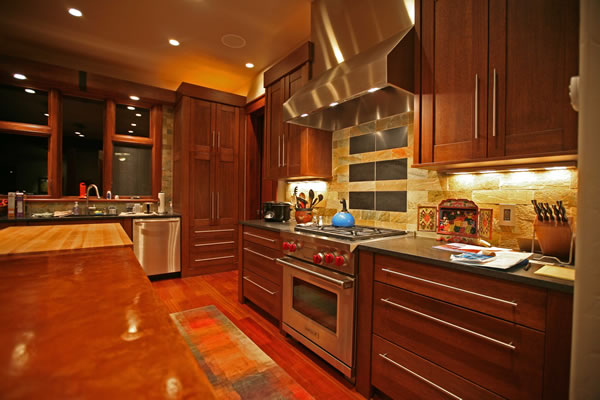 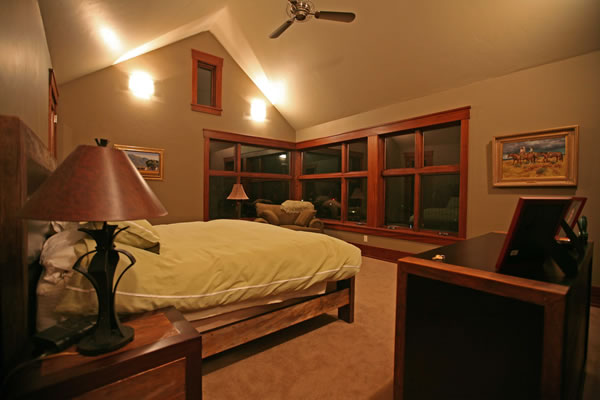 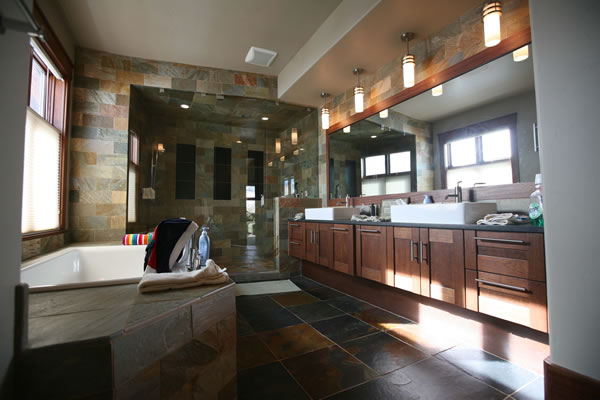 Rustic Yet Elegant was featured on the cover of the magazine “Architecture Leaders Today”. This is a truly unique home in both appearance and design. It also somehow manages to be rustic and elegant at the same time! Well–placed exterior lighting shows off the exterior detailing, and abundant natural light and views are provided by large wrap–around windows in the living room and the master suite. And the garage is topped by a large deck that’s accessed from the landing between the main and upper levels.

Steps rising from the same level as the garage lead to a spacious covered front porch. As you enter the foyer, angled walls on either side have doors opening to a coat closet and a powder room. These angles are mimicked by exposed beams in the living and dining areas, as well as in the large center island in the kitchen. There’s also a built–in bench in the foyer beneath a 42″ wall that looks into the living room. From the entryway, the living room is on the left, stairs to both the upper and lower levels are on the right, and the kitchen and dining room are straight ahead.

The living room – like all the rooms on the main level – has a ceiling that’s set at a lofty 10′. Large windows that wrap around the far corner provide great views to the front and side, and there’s an optional gas fireplace in another corner. The kitchen is open to both the living and dining rooms. The kitchen features a large unusually–shaped center island with a bar for casual dining and/or serving, a huge pantry room, and a trio of windows over the sink. The two outer walls of the dining room are composed mostly of glass – a trio of windows look to the rear, while sliding glass doors open to a deck with views in three directions.

One set of stairs leads down half a flight to a large mudroom with a built–in bench and cubbies, and a window for natural light. One door opens to the 2–car garage, while another opens to a laundry room that includes a large storage area. Both of these rooms have 9’8″ ceilings.

The other set of stairs on the main level leads up half a flight to an open landing area with glazed doors that open to a deck that covers the entire garage area. A sliding door to the left opens to a room with a view that can be used as either an office or a guest room. This room and the landing have 9′ ceilings.

At the top of the stairs to the upper level there’s a hall with doors opening to bedroom 2, a full bath, and the master suite. The master bedroom has a ceiling that rises from 9′ at the outer walls to nearly 15′ in the center. A window near the peak adds to the light and views provided by the large wrap around windows. A door at the far end of the room opens to a private deck situated above the front porch, another opens to a very spacious walk–in closet, while a third opens to the master bath. The bath – like all the rooms on the upper level except the master bedroom – has a 9′ ceiling. It features a bathtub beneath a pair of windows, a large shower with a built–in bench, two separate vanities, and a private toilet. Bedroom 2 has a large closet, a trio of windows facing the rear of the house, and a ship’s ladder to a loft space that matches the office/guest room below it.

The lower level was built as a walk–out because of the slope of the lot. There’s a third bedroom on this level with a full bath and a walk–in closet. Windows along one wall provide views to the side, while sliding glass doors open to a patio at the rear. There is also a large bunk room with terrific views, a huge closet for storage, and another full bath. An open family room has sliding glass doors that open to the rear patio, while another door opens to a mechanical room.

Front Elevation For Rustic Yet Elegant

Rear Elevation For Rustic Yet Elegant

Side 1 Elevation For Rustic Yet Elegant

Side 2 Elevation For Rustic Yet Elegant

This is a truly unique and striking home, inside and out. Wood detailing and siding are combined with a plethora of contemporary windows on the exterior, and stunning wood treatments and angled lines are featured in the interior. On the main level the spacious kitchen features a huge center island and a walk–in pantry; the dining room has a great view through sliding glass doors that open to a private deck; and the living room has a fireplace and a panoramic view. The master suite is upstairs, along with a second bedroom suite and an office/guest room, and on the lower level – should you choose to build it – there's a third bedroom suite, a bunkroom with its own full bath, and a spacious family room.