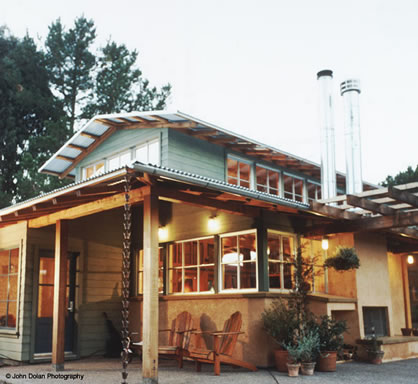 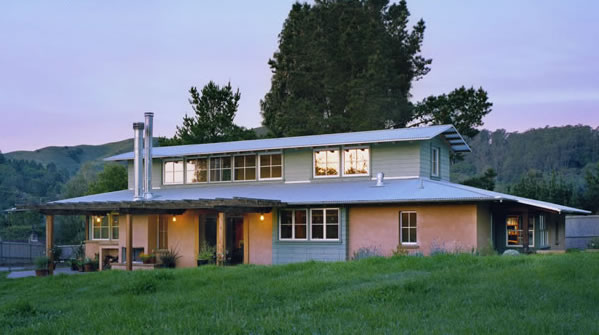 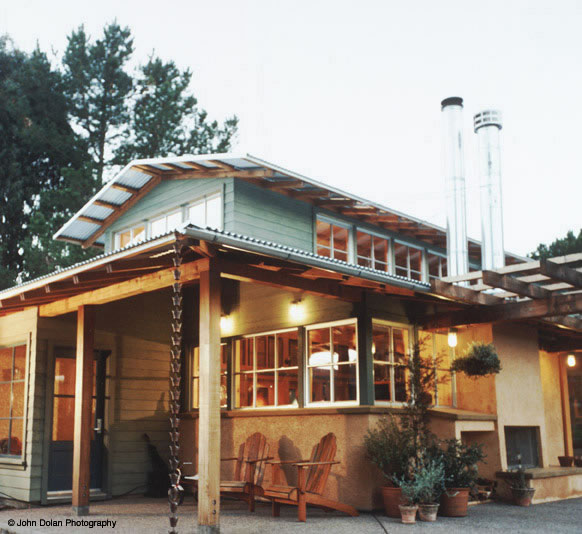 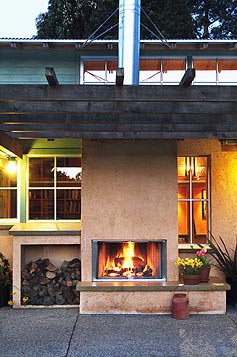 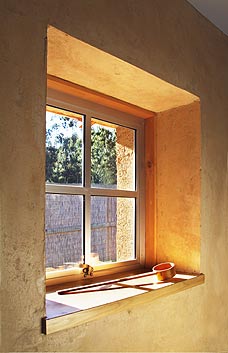 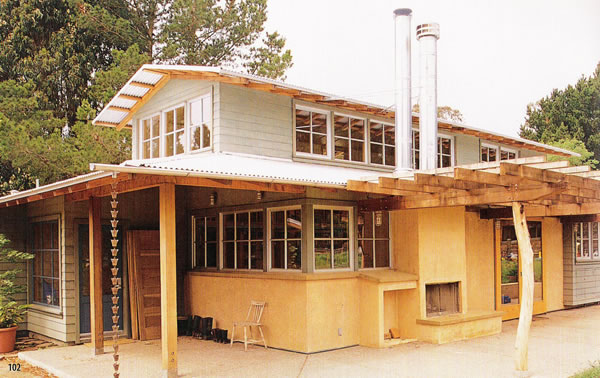 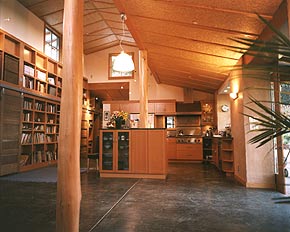 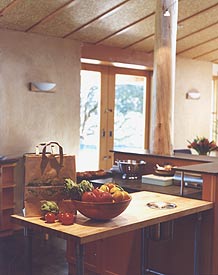 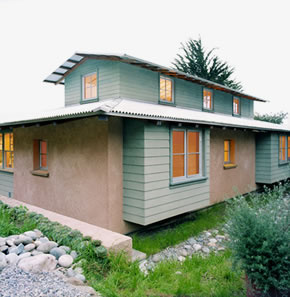 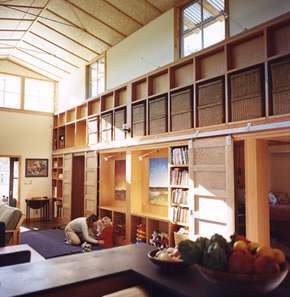 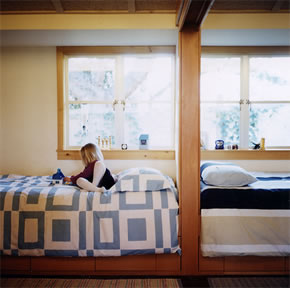 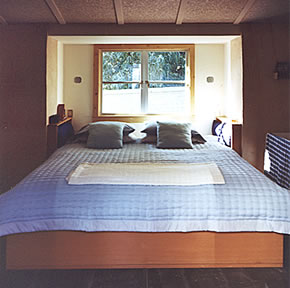 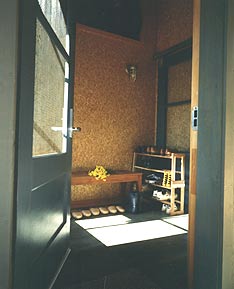 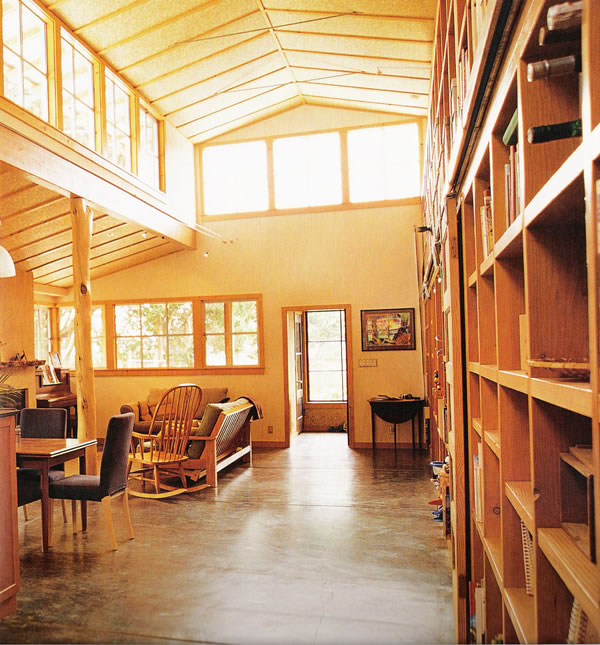 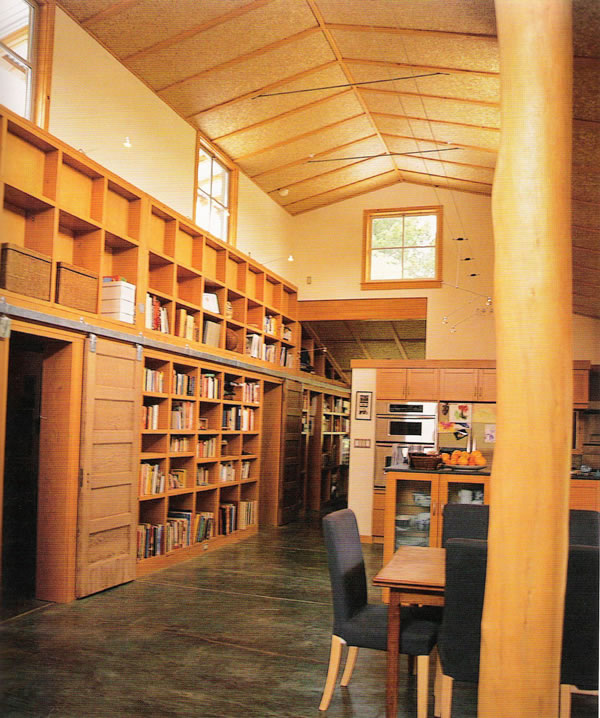 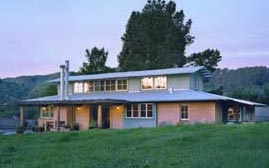 Natural Habitat received the Western Home Award from “Sunset” magazine, and has been featured in numerous books and magazines, including “The New Strawbale Home” by Catherine Wanek, the May/June 2004 issue of “Natural Home” magazine, and “Real Simple” magazine. The architects were able to create a 4–bedroom home with just 1,860 sq. ft. – a testament both to the efficiency of their design and to their commitment to “green” issues.

A door off the covered front porch brings you first to a sunny mudroom that opens to the main living spaces of the house. A clerestory runs down the middle of the house, with a ceiling that reaches nearly 16′ in the middle and a series of windows that fill the house with light during the day, while on either side the ceilings slope gently down from 9’6″ at the edge of the clerestory to 8′ at the outer walls. Great room, kitchen and dining are one open space, with beautiful built–in wooden bookcases along the entire wall on the left. On the right, a two–sided fireplace can be enjoyed from inside the great room as well as from an outdoor patio that is accessed via sliding glazed doors. Windows to the right of the fireplace wrap around to the front, providing abundant natural light as well as views.

The kitchen has a large L–shaped island with a raised outer countertop for casual dining or serving, a pair of large windows over the sinks, and a pantry around a corner. Sliding doors in the long bookcase open to the four bedrooms, each of which feature a bump–out window bay where the beds were to be located, and closets flanking the doorways. The master bath has a private toilet and a large shower that can be accessed directly from outside, while the other three bedrooms share a full bath with two sinks. A unique sliding wall separates the two middle bedrooms. An opening off the kitchen leads to a small office with a built–in desk beneath a trio of windows, and to the laundry room.

Side 1 Elevation For Natural Habitat

Side 2 Elevation For Natural Habitat

This unique straw bale home manages to provide four bedrooms in 1,860 sf of living space. Featured in books and magazines, and the recipient of a prestigious award, this is a truly extraordinary house. Clerestory windows allow natural light to flood the interior, and tall bookshelves line the walls separating the living spaces from the bedrooms. An optional two–sided fireplace can be enjoyed from both the living room and an outdoor patio.