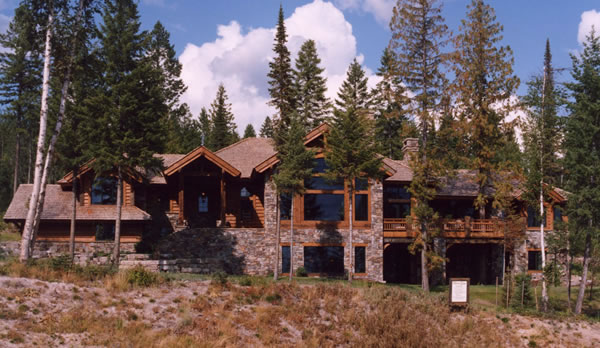 This one–of–a–kind home was designed to capitalize on a site accessed from the downhill side, and with views on the downhill side. The facade of the original house was composed of stone veneer and thick lap siding, with lots of wood details at the gable, around the windows, and at the entryway. Antique wood beams and flooring that was reclaimed from an old mine were used liberally in the interior, adding a rustic feel to this otherwise contemporary home.

This exceptional home features two master bedrooms (one with his and hers baths and closets) at either end of the house, a study, a formal dining room, a great room, a hearth room, a kitchen and nook, two additional guest suites, a maid's apartment, a huge recreation room, a tap room/bar, a wine room, and a theater! Outside, a stone fire pit, a built–in barbeque, and a hot tub off the hearth room and nook create a private haven for entertaining on the private uphill side of the home.

The entry porch sits beneath a tall and deep gabled roof supported by timber beams atop stone veneer covered bases. As you turn to the right and step through the front door, you enter a foyer with a ceiling that vaults to 14'6", and a view into the dramatic great room and beyond it to the formal dining room.

The ceiling in the great room vaults from an already impressive 12' at the edges to nearly 20' in the center. A large wood–burning fireplace with a stone mantle that rises to the ceiling faces you as you enter the room. An enormous window with a single large pane topped by two sections of multi–paned windows reaching almost to the ceiling flanked by tall multi–paned windows on either side provide abundant natural light, and views to the front of the house. Glazed doors to the right of the fireplace open to a large deck at the front of the house.

Just to the left of the fireplace is the formal dining room. It has a stately 13' ceiling, is open to the kitchen, and a glazed door flanked by windows looks out to the deck. The spacious kitchen also has a 13' ceiling. A large island with a double sink and a breakfast bar is located in the middle of the room, and an opening at one end reveals a deck area and a large walk–in pantry. A casual dining nook is fit into a bay with three large windows that look out to a large patio. Just beyond and open to the kitchen is a comfy hearth room. An entire wall of windows on your left looks out across the rear of the house, while a matching wall opposite it looks and walks out to the patio. The ceiling in this room vaults from 11' to 13'.

The remainder of the right side of the house is devoted to the first master suite. The bedroom ceiling vaults from 10' to an impressive 17', and it features a built–in fireplace and entertainment center, two doors to a covered portion of the front deck, and double doors to a covered portion of the rear patio. There are two alternative plans for the master bath area. One features a dressing area with natural light, an enormous walk–in closet, two separated sinks, a large shower, a soaking tub beneath a pair of windows, and a private toilet. The alternate version is broken up into "his" and "hers" bathrooms with a common shower.

Returning to the foyer, one set of stairs on your left leads up to the second master bedroom suite, and the other leads down to the 3–car garage and the lower level of the house. This master suite features a sitting area with a built–in fireplace and a ceiling that vaults from 9' to 11'9" in the bedroom, and a bath area with both a shower and a tub, two separated sinks, a private toilet, and a large walk–in closet.

Beyond the stairs is another bedroom that could also he used as a home office. It has a pass through closet leading to a bath that doubles as a guest powder room, and a pair of glazed doors that open to a small patio at the rear of the house. Next to this room is a study that also accesses the rear patio, and it too has a walk–in closet. Both these rooms have 10'10" ceilings.

The simplified basement plan that we show on our website is a slightly revised version of the original plan. The 3–car garage connects to the house at mid–level, and from the landing just inside the house there is access to a mudroom and a laundry room just beyond it, and stairs leading up to the main level and down to the lower level. Half of the lower level is devoted to entertaining, while the other half includes two more bedroom suites. A good sized wet bar with seating faces a large recreation area that features a built–in fireplace and entertainment center, a wall of windows for light and views, and a pair of doors that open to a patio covered by the deck above it. Double doors across from this room open to an elegant wine room.

As you walk down the hallway to the two bedrooms suites, you pass a media room that also has access to unfinished storage, and a mechanical room. Each bedroom has a walk–in closet, a full bath, and lots of windows facing the front of the house. Bedroom 4 has a door that walks out to the covered patio, and bedroom 5 was designed to be an in–law suite. It has an exterior door to the front, a bump–out that provides additional living space, and a kitchenette. All of the ceilings on this lower level are set at 10'7".

Side 1 Elevation For Mountain Magic

Side 2 Elevation For Mountain Magic

This striking home was designed for a family with a lot that faced a fantastic mountain view. Because the lot sloped to the front, the homeowners were able to have a lower walk out level, adding two additional bedrooms and a large entertainment area to what could otherwise be a three bedroom, one–story house. As you'll see from the photos, wood is emphasized as much in the interior as it is on the exterior. This unique home features two master bedrooms on the main floor, and nearly every room on this level is vaulted.