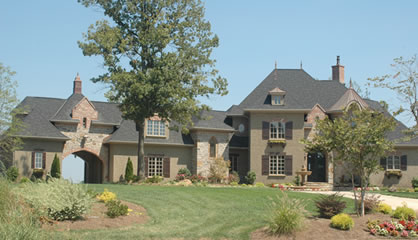 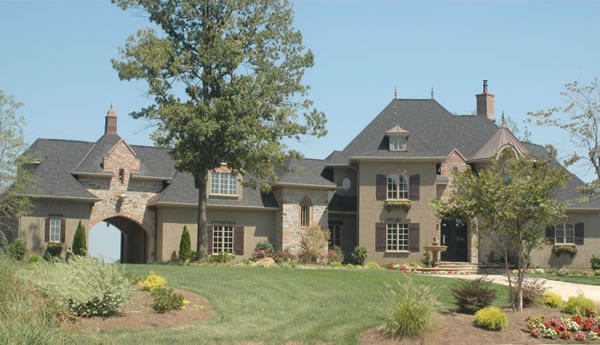 This elegant estate home commands your attention as you approach it. Including the attached garages it’s 130’–wide, and a large portion of the roof reaches 38′ in height. The overall style is clearly European, with an exterior that features a combination of stucco and stone, accented with arched multi–paned windows, wood shutters, brickwork, and copper spires at the roof.

As you enter the vaulted foyer from the covered entry porch, there’s an elegant curved stairwell on your right, and a formal dining room with a 10′ ceiling crossed by exposed wood beams on your left. As you move into the house, you pass through a narrow gallery that’s defined by wood columns with curved wood brackets and an 8’–high dropped soffit that supports a bridge connecting the rooms on the upper level, before entering the dramatic gathering room. The ceiling in this room soars to a stunning 20′ flat ceiling, with a gothic arch in the middle that adds another 4 feet! Windows at the far end of the room flank a pair of glazed doors that open to a curving covered veranda at the rear of the house.

Since the gathering room and kitchen are open to each other, separated visually by an exposed wood beam where the ceiling drops back to 10′ (the height of all the other ceilings on the main level), the large fireplace in the gathering room can be enjoyed from the kitchen as well. This room is quite spacious, and it extends into a curved breakfast nook that’s wrapped by angled windows that provide both natural light and views out to and through the covered veranda. There’s a large center island across from the six–burner range with a pair of sinks on top, so that one can be involved in the activities in the gathering room while washing up. The far edge of the island has a raised curved bar for casual eating or serving.

A pair of glazed doors off the nook open to a screened porch with a built–in grill. A screen door opposite the grill opens to the veranda. At the other end of the kitchen there’s an opening between it and the dining room where a wet bar has been conveniently located. Nearby, another opening brings you to a vestibule that provides access to the gallery, the dining room, a walk–in pantry, and a mudroom with a built–in bench and a coat closet. A hall off the mudroom provides access to a large laundry room with windows over the sink, a powder room, a home office with a view, a second set of stairs to the upper level, and a two–car garage. At the far end of the garage a door opens to the porte–cochere, where another door opens to a separate one–car garage.

The rest of the house is dedicated to the master suite. A vestibule with a built–in niche off the foyer provides access to the master bedroom as well as a deep coat closet beneath the stairs. The bedroom itself is quite large, and it extends into an octagonal sitting space with windows in each angled wall and an octagon–shaped coffered ceiling. Double doors at the far end of the room open to the covered veranda, while another pair of doors open to the master bath area. The bath has two completely separate vanities, a whirlpool tub beneath corner windows, a large shower, and a private toilet. Another vestibule provides access to both a “his” and “hers” walk–in closet.

At the top of the curved stairs to the second level, after passing arched window openings along the way, there’s a loft space that provides access to bedroom 3, as well as a large attic space. This unique suite juts out at an angle, terminating at a three–sided window bay for light and views. This room has a walk–in closet and a full bath.

The loft becomes a narrow bridge with railings on either side that look down into the gathering room and the foyer. An opening at the end of the bridge brings you to a hall that provides access to two more bedroom suites as well as a large entertainment area. Bedroom 2 has a view to the front, while at the far end of bedroom 4 there’s a round sitting area with a ceiling that vaults to a point in the center, and a trio of windows. These two rooms share a Jack & Jill bath with a common space with two sinks, and a private shower/tub and toilet.

Before reaching the entertainment area, you pass another laundry, a powder room, access to attic storage, and the secondary set of stairs. Across from the stairs there’s a wet bar with a wrap around counter, and a built–in sink below a raised bar ready for bar stools. It faces into a game/entertainment room with a flat 8′ ceiling on either side of a vaulted section in the middle that rises to 16′. At its midpoint, this room widens by 5′ on either side, with barrel ceilings above wide windows on either end. At the far end of the game room you enter a home theater with a ceiling that vaults from each edge to the center, beneath a hipped roof.

Please Note
Due to licensing agreements, this home may not be built within a 50–mile radius of downtown Charlotte, North Carolina, without permission of the designer.

Side 1 Elevation For Country Estate

Side 2 Elevation For Country Estate

This estate home combines a French Country style roofline with other European influences. The 2–car garage is separated from the 1–car garage by a convenient porte–cochere, and the space on the upper level right above them includes a large recreation room with a wet bar and a home theatre. The master suite is quite spacious, including an octagon–shaped sitting area off the bedroom with a wrap around view.