Since 1992, as Principal of Living Shelter Design Architects, Terry has created designs for, and overseen documentation of, over 150 custom single–family homes, 5 clustered community projects, and 3 commercial structures. Her designs combine timeless style with sustainable solutions, integrating passive solar concepts and utilizing pockets of space that are often forgotten in other home plans. Terry took the apprenticeship path to professionally practicing architecture, including work as a plans examiner and building inspector, a mechanical drafter and drafting room manager, and several years as an architectural drafter and designer.

Terry has a depth of experience designing with many different materials that are both proven and sustainable. Since 1999 she has been giving strawbale workshop trainings and is now invited regularly to speak at regional conferences such as Cascadia Region Green Building Council’s Living Future and Built Green. Terry served on the regional board of the Northwest EcoBuilding Guild from 2004 to 2009, finishing her term as its Co–Chair. She is also the host of The Living Shelter Cafe, an interview style radio talk show on sustainable design, building, and living options.

A home of Terry’s design was awarded ‘Best Architectural Design’ and ‘Best Master Suite’ in the 1989 Seattle Street of Dreams. Her progressive accomplishments were recognized in 2005 when Living Shelter Design was given the King County Earth Hero award. Her published works have appeared in Mother Earth News, Natural Home, Conscious Choice, The Last Straw Journal, Green by Design, The New Straw Bale House, and The Daily Journal of Commerce. 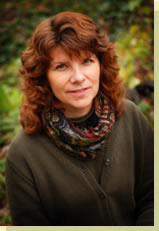 Other Plans by
Terry Phelen