Katherine Hillbrand enthusiastically engages with her clients to find design solutions that articulate functional beauty. Her work ultimately embodies the spirit of each specific circumstance and place. She is known to incorporate both handcrafted timber joinery and common, everyday materials in unusual and whimsical compositions. Her work includes both large and small projects that reveal a poetic juxtaposition of familiar elements and modern solutions. Her approach to sustainable architecture encourages environmental stewardship through design and culminates in well–crafted buildings that fit comfortably in their settings.

Katherine joined SALA Architects, Inc. in 1986 and became a Principal in 1995. She received both a Bachelor of Arts in 1965 and a Master of Architecture in 1986 from the University of Minnesota. She is a registered architect and certified interior designer in Minnesota, Utah, Michigan and Wisconsin. She has been published both regionally and in national publications. 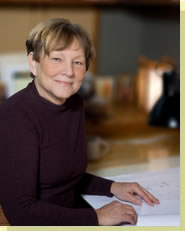 Other Plans by
Katherine Hillbrand