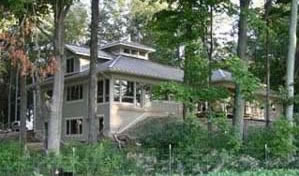 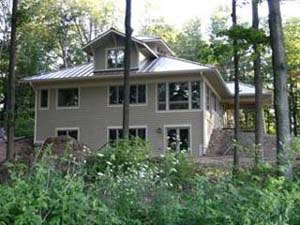 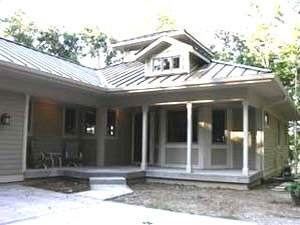 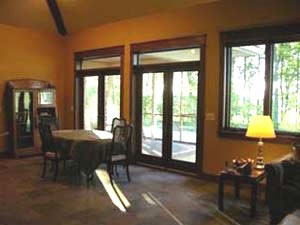 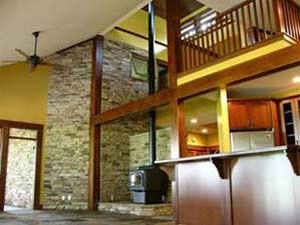 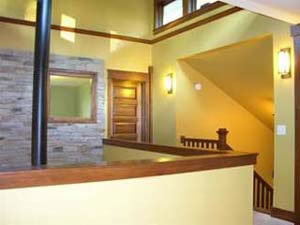 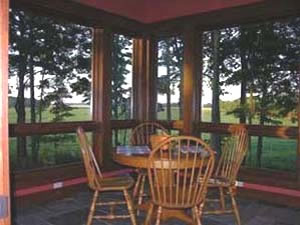 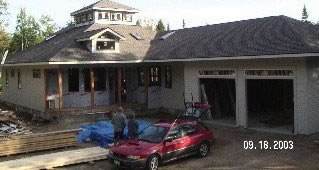 This house features an atrium in the middle that's filled with natural light, arriving from clerestory windows that pop out of the roof. The three small windows facing the front are operable – either electronically or manually (using a long pole) – to allow heat to be drawn out of the house on warmer days. The house can be built with either one or two bedrooms on the main level, and there's another bedroom on the lower level should you decide to build it. It can be a passive solar house if it faces northwest (but north would work almost as well).

As you approach the house, the entry is on the left, set quite a ways back from the side of the garage. From the covered porch, the door opens to a foyer that widens as you move into the house. You pass a pair of doors on the left that open to a study. If you look at Modification Ideas below you'll see a simple way to convert this room to a bedroom with a full bath. This room has a bumped–out window bay that looks out to and through the front porch, a wide window mounted up near the ceiling for additional light, and a closet. The ceiling is set at a comfortable 9', just like the rest of the rooms on the main level.

When the foyer expands, there are stairs to the upper and lower levels on your left and a built–in desk and cabinets on your right that are inside the sunny atrium space. On the other side of the wall where the desk is, also inside the atrium space, the original homeowners wanted a wood–burning stove installed. Directly across from the stove is an opening to the kitchen. The flat portion on the ceiling in the kitchen – like all the rooms on the left side of the main level – is set at a comfortable 9' except for a square section that is open to allow natural light to enter via skylights in the roof. Other unique features in the kitchen include an angled island between the kitchen and both the living and dining areas that has a range on top – allowing the person cooking a meal to enjoy the activities of those who will eat it – and a breakfast bar on the outer edge for casual eating and serving; sinks placed beneath two corner windows for light and views; and a large walk–in pantry.

The dining space and the great room are open to each other, and the ceiling above them angles up from 9' at the outer wall to around 16'. The outer wall of the great room is filled with either 60"x60" windows or glass–filled French doors with transoms above that open out to a long deck area at the side of the house that wraps all the way around the sunroom at the back of the house. A second set of glass–filled French doors off the dining space opens to a screened porch that would be ideal for outdoor dining and/or entertaining. The far wall of the great room is also filled with large windows that look into a lovely sunroom at the rear of the house. A glass door next to the windows provides access to the sunroom, which is not only wrapped in windows like those in the great room, but also have 2'–high windows installed beneath them. Another glass door opens to the rear deck area.

A short hall between the kitchen and the dining area passes a powder room before reaching a mudroom space and the two–car garage beyond it. Pull–down stairs in the garage provide attic access, and windows along two walls provide plenty of daylight.

A door at the end of the wide portion of the foyer opens to the master suite. The far wall of the master bedroom is filled with windows, and one inner wall is angled at 45–degrees, giving the space an interesting look and feel. You pass a large walk–in closet on the way to the bath area, which features a large claw foot tub beneath a 6'–wide window, a separate shower big enough for two, a private toilet, and a small window seat. A good–sized laundry room is located at the end of a short hall next to the stairwell.

At the top of the stairs to the upper level, after passing built–in shelving at the first landing, you're facing a 42"–high wall that looks down to the atrium. This wall continues around the side of the atrium, then turns and looks down to the great room and dining area, before turning again and looking down into a portion of the kitchen. The loft area is quite large, so it can be used for many purposes. There are two doors off of it that open to eave storage areas, and at the end of the "L" there's a small reading bay.

Bedroom 3 is located on the opposite side of the stairway. The bedroom has an angled wall that matches the one in the master bedroom below it, and a pair of tall windows provide light and views to the rear. A 2'x2' door provides access to a plant shelf that can be seen from the sunroom. Next to the bedroom there's a small bathroom with a shower. There's space behind the bathroom that can either be used as eave storage or a spot to locate the HVAC system.

If you choose not to build the basement, the space where the stairs would have descended could be turned into a deep closet for coats and storage.

Garage
If your lot is narrow, the garage doors could be moved to face the front.

Modification Ideas
If you were to move the laundry to the space where the half bath and mail nook are, next to the mudroom, you could change the laundry room space into a full bath for Bedroom 2.

Similar Versions Available
There is a similar one–story version of this plan – Sun–Filled Cottage 2 – available on this site. For easy access to this other version, click on the architect's name (in red, in the upper left corner of this page). Red links to each of her plans appear below her bio, in alphabetical order.

Side 1 Elevation For Sun-Filled Cottage

Side 2 Elevation For Sun-Filled Cottage

This well thought out cottage features tremendous views to the rear and one side. An atrium with clerestory windows allows sunlight to fill the center of the house. The ceiling in the great room and dining space angles up to a height of 16'. There's a covered porch at the entry, a screened porch at the rear off the dining room, and a deck that spans the remainder of the rear of the house before wrapping around the sunroom in the corner.