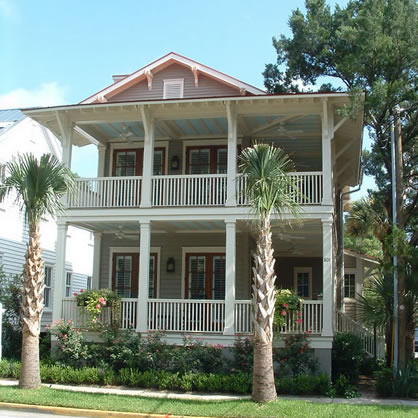 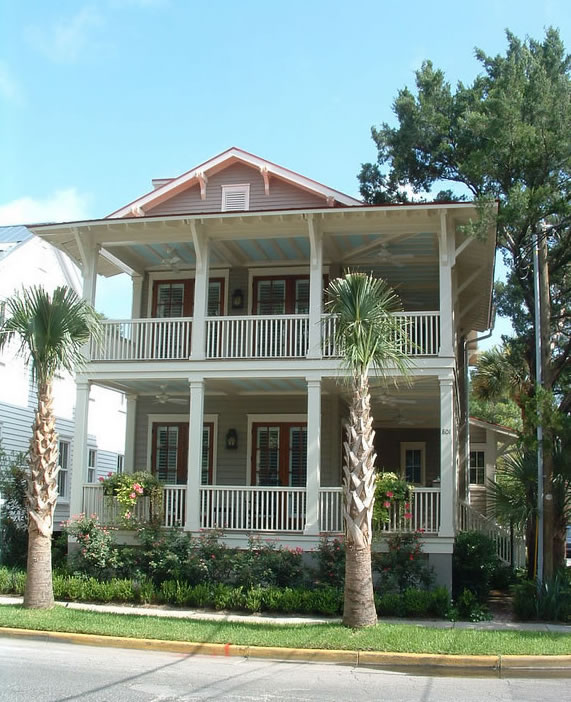 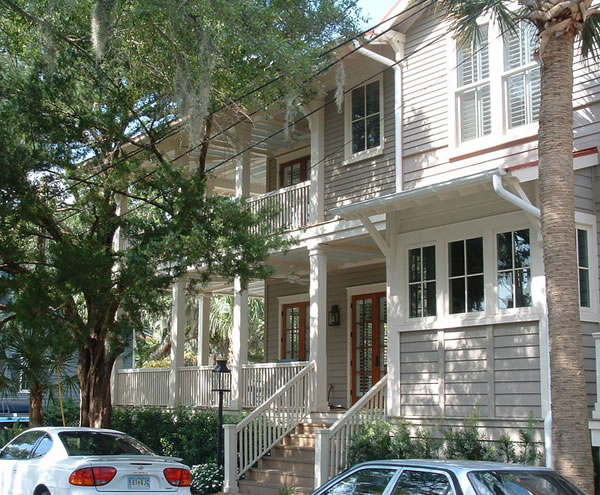 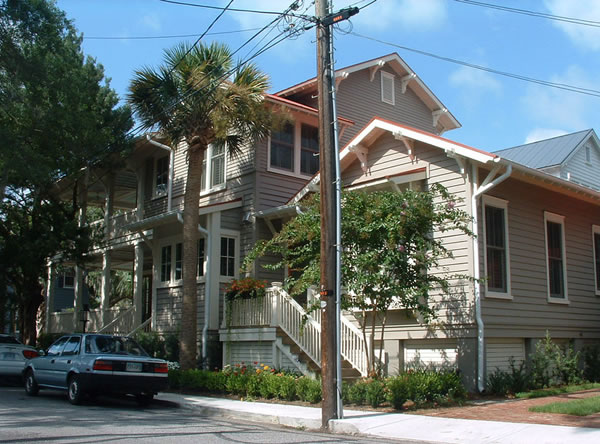 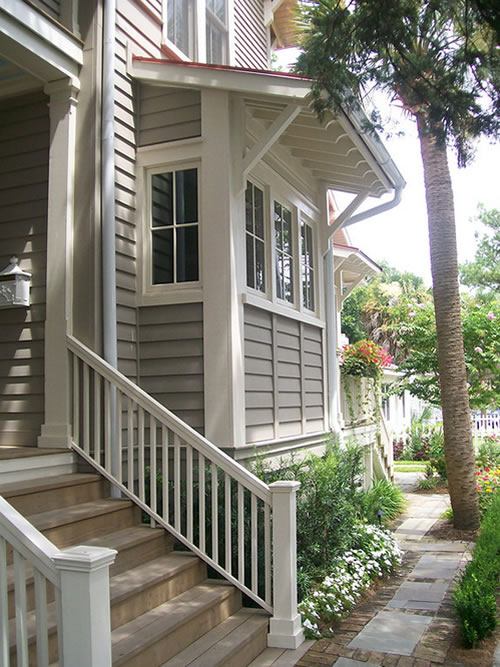 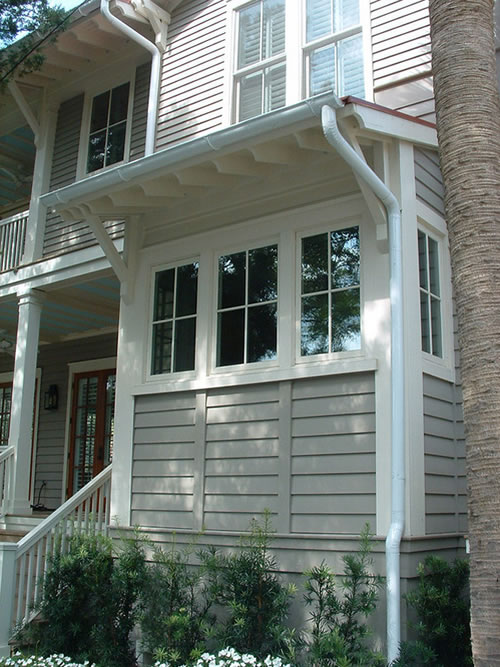 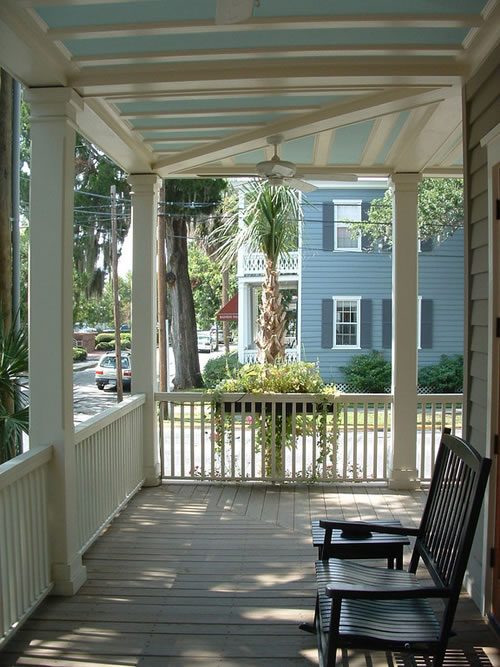 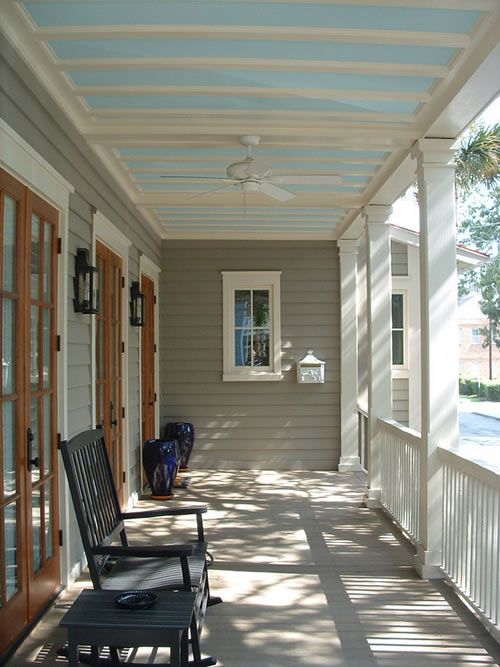 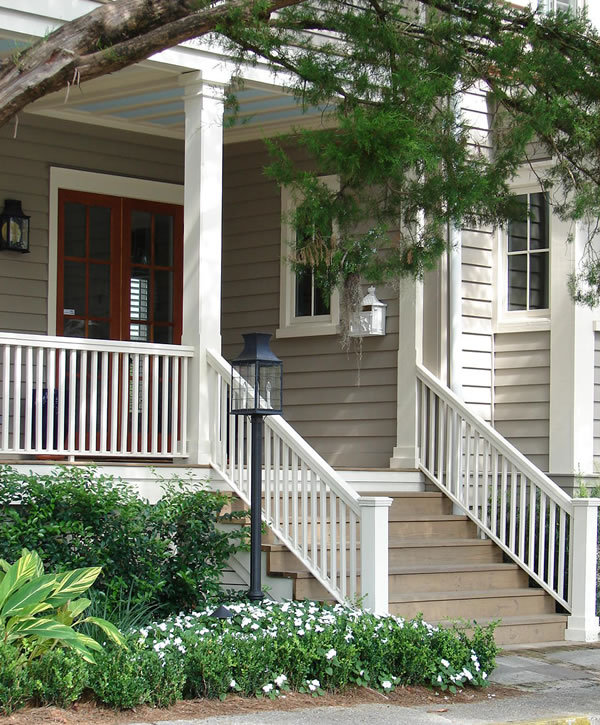 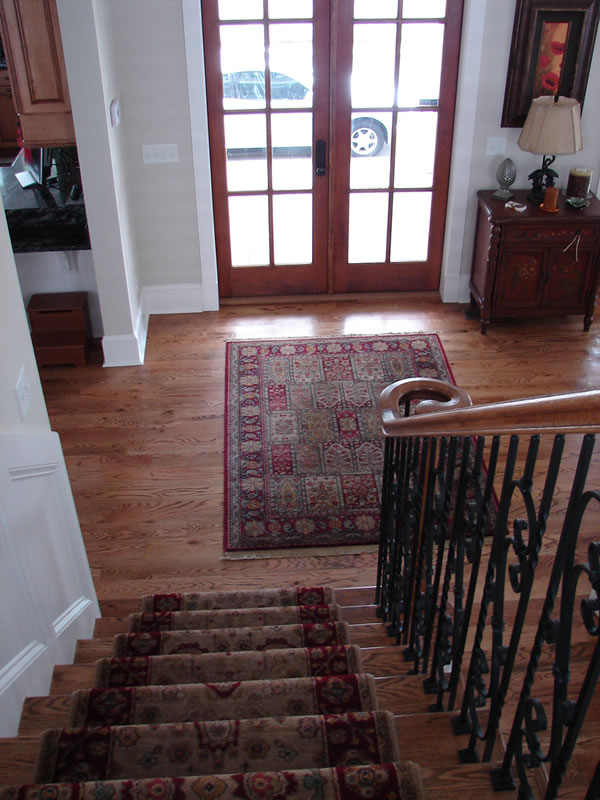 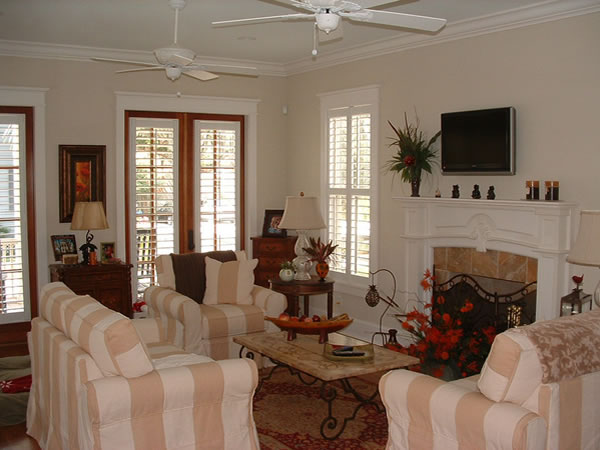 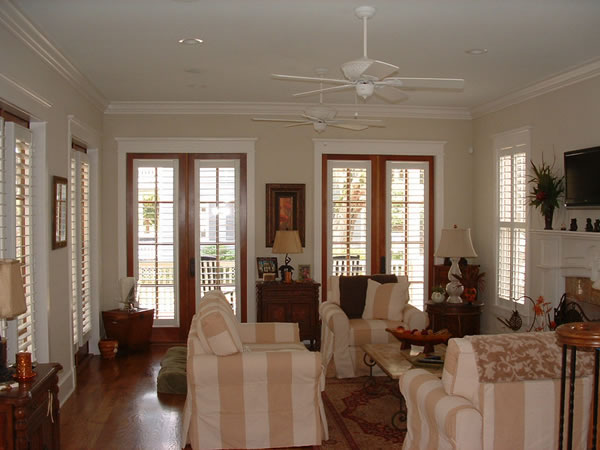 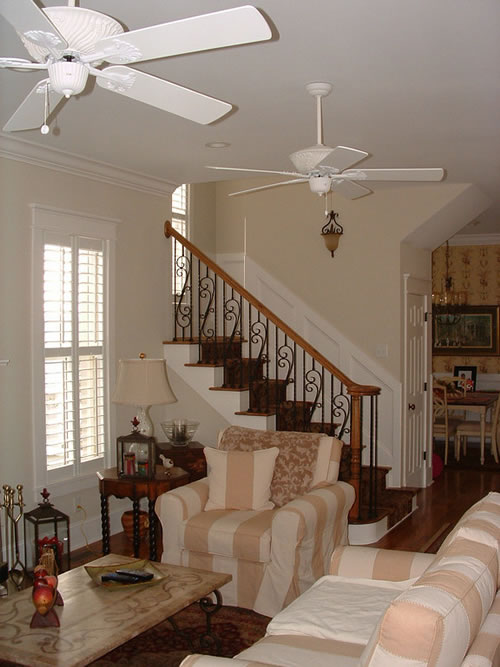 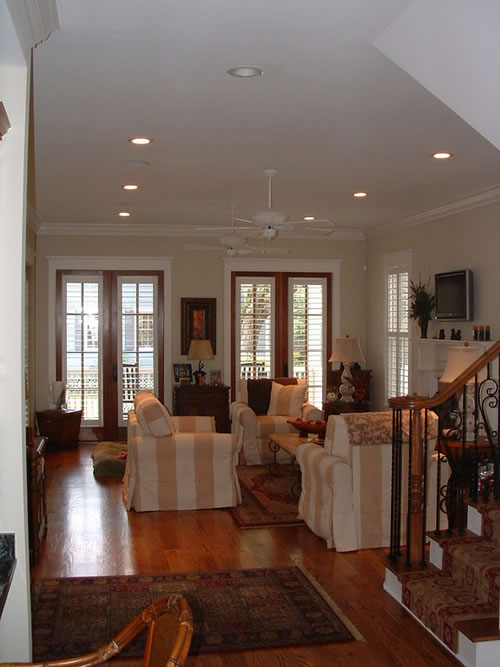 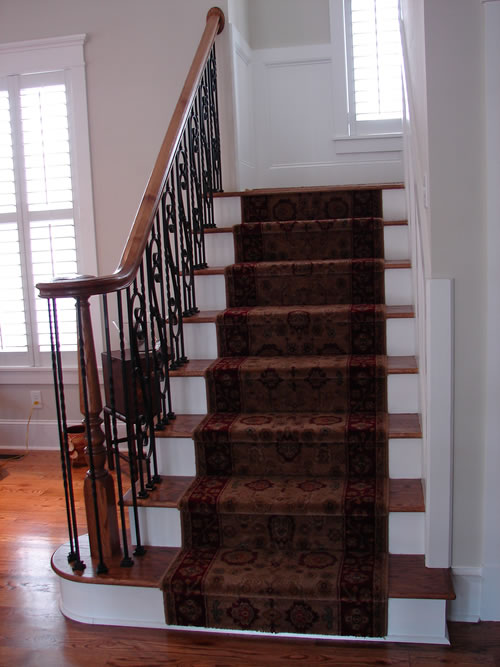 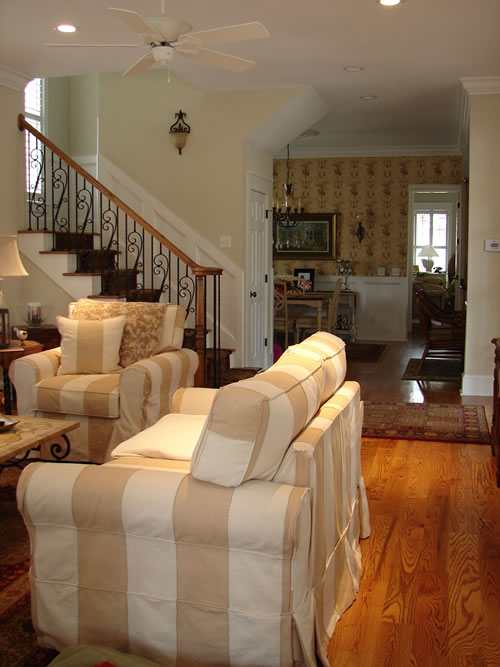 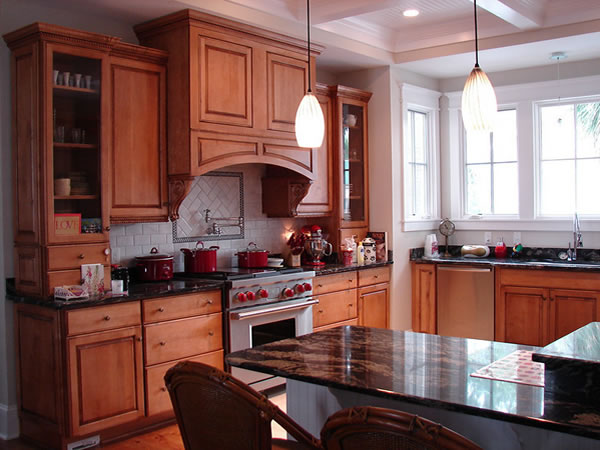 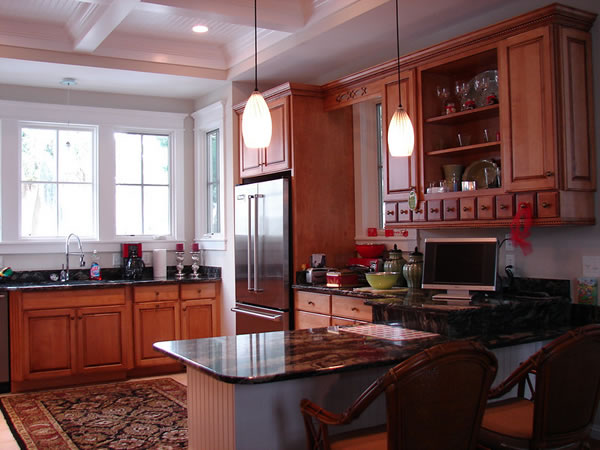 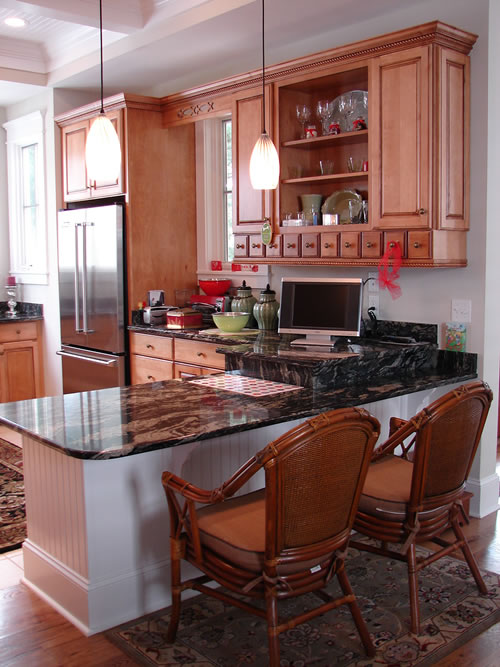 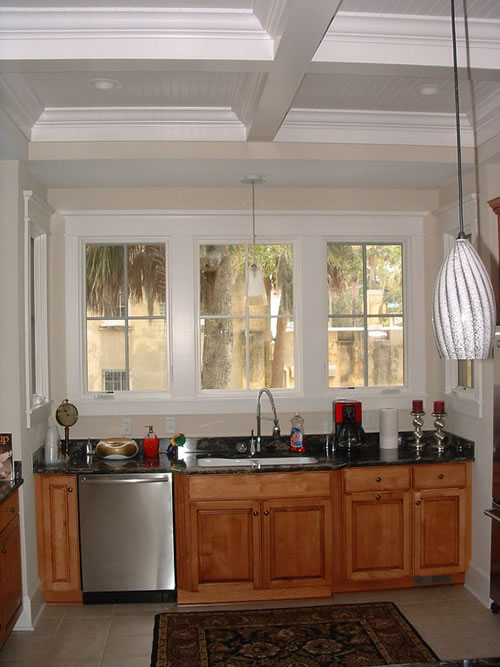 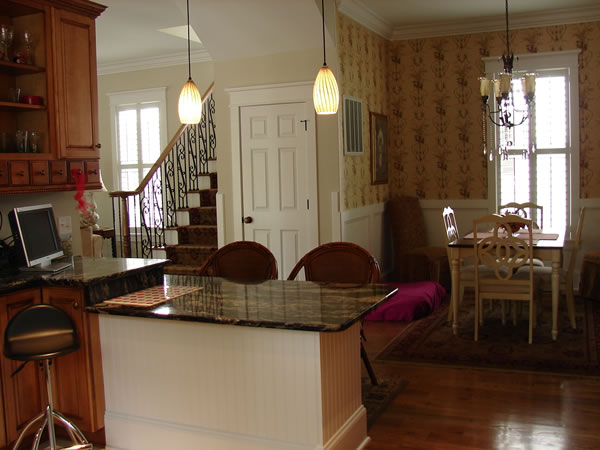 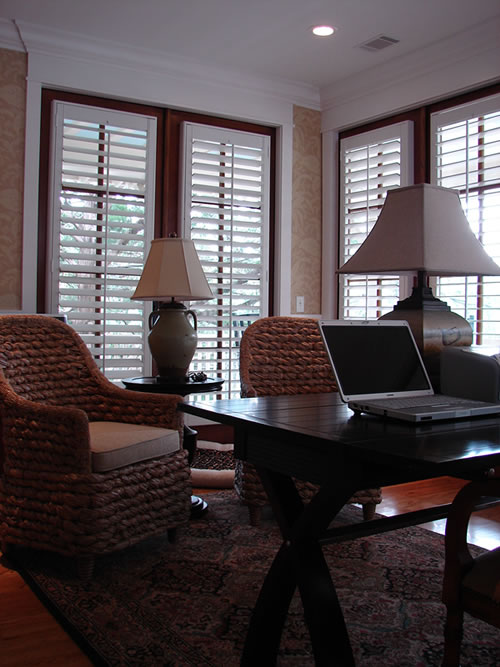 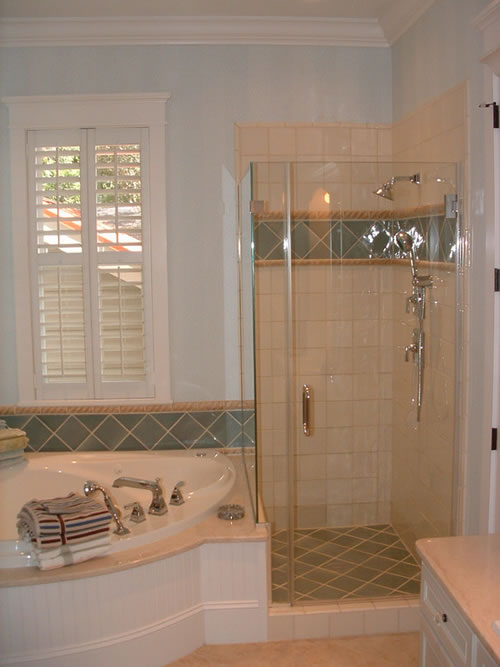 The original homeowners chose to have a side entry (but you could of course have a front entry if you prefer). Stairs – needed because the homeowners built over a crawlspace that projects above ground – rise to the porch, and straight ahead double doors open to one end of the living room. Like all the rooms on the main level (except the master bedroom), the living room has a lofty 10' ceiling. There is a centrally–located fireplace flanked by large windows on the far wall, and the other two exterior walls have four pairs of glazed French doors that open out to the covered porch.

From the living room, you pass the stairs to the upper level and a coat closet before entering the kitchen and dining room. The kitchen is filled with light, thanks to a bump–out bay that is wrapped with windows (providing a 180–degree view while washing the dishes!), and another window over the range that looks out to the porch. It is separated from the dining room by a peninsula countertop that can be used for casual dining or serving.

A short hall between the kitchen and dining room provides access to a powder room and a laundry room (with a door that opens to a stoop near the rear of the house), as well as the master suite. There are no rooms above the suite, so it's both quiet and private. The ceiling in the bedroom is set at a dramatic 11'4". There are two windows on the far wall that flank the space where the bed would probably be located, and a pair of windows in a bay on the other exterior wall have a built–in window seat beneath them. The master bath features a soaking tub in a corner beneath two windows, a separate shower, two sinks, and a private toilet. A door opens to a walk–in closet.

The stairs to the upper level have a large window at the landing for light and views. At the top, doors to the left and straight ahead open to bedrooms 2 and 3. Like all the rooms on this level, the ceilings are set at 9'. There are two full baths, and a French door at the end of a short hall opens to the side portion of a wrap around porch. A door next to it opens to bedroom 4. Three pairs of French doors open out to the covered porch, so if you don't need four bedrooms you could use this for another purpose.

Side 1 Elevation For Side Entry Charleston Classic

Side 2 Elevation For Side Entry Charleston Classic

This handsome southern–style home is an American Institute of Architects Award winner. With the appearance of a classic Charleston side yard home, it has been reinvented for today's lifestyles. The master suite is located on the first floor; there's a casual dining room next to the kitchen; the open living room has five sets of glazed double doors that open to a 10'–deep wrap around covered porch; and the bedrooms on the upper level share an equal sized wrap around covered porch.