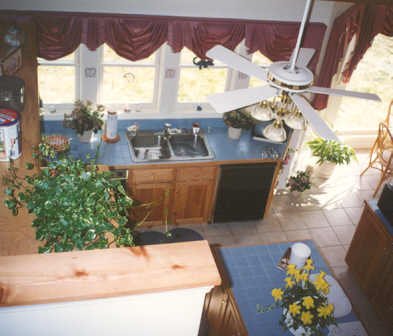 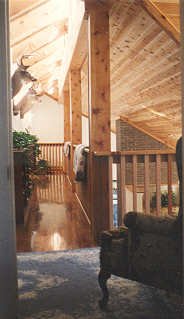 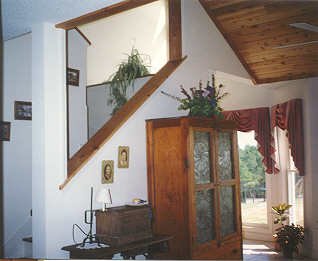 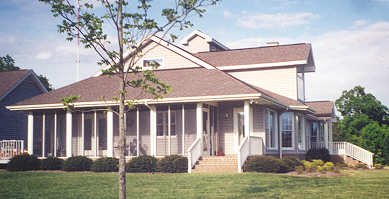 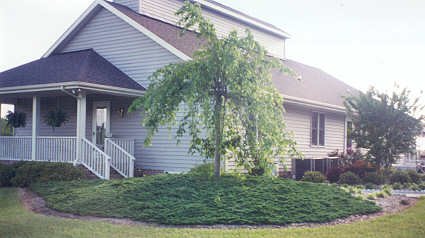 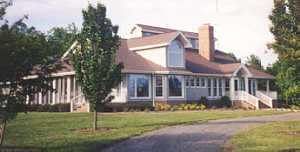 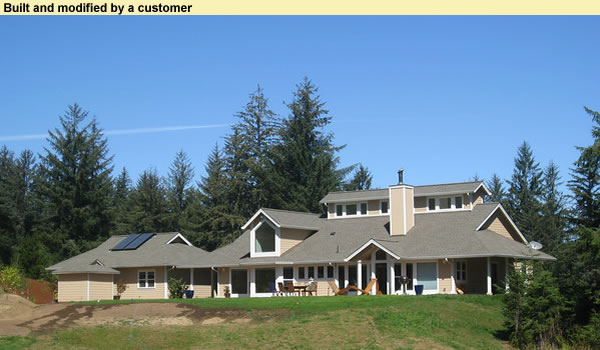 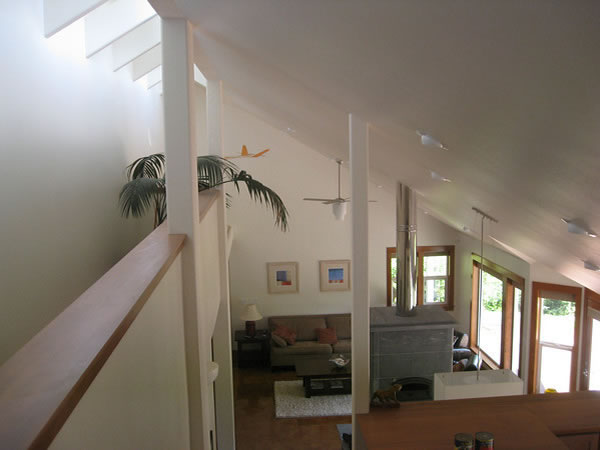 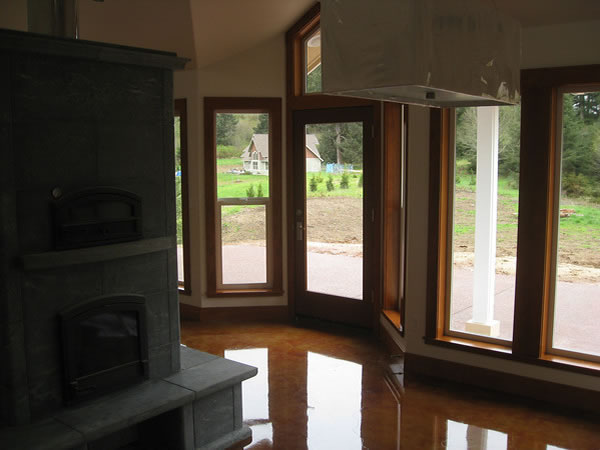 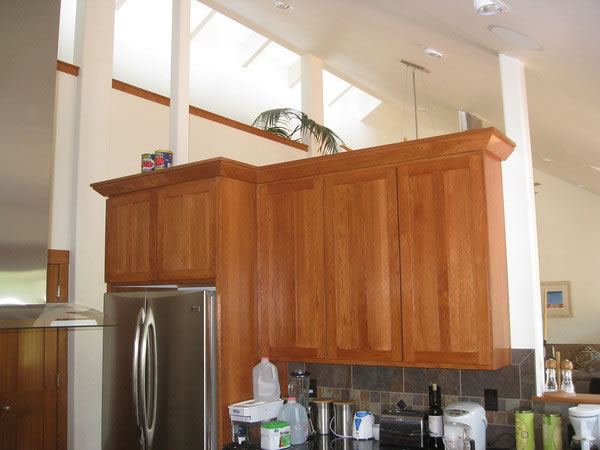 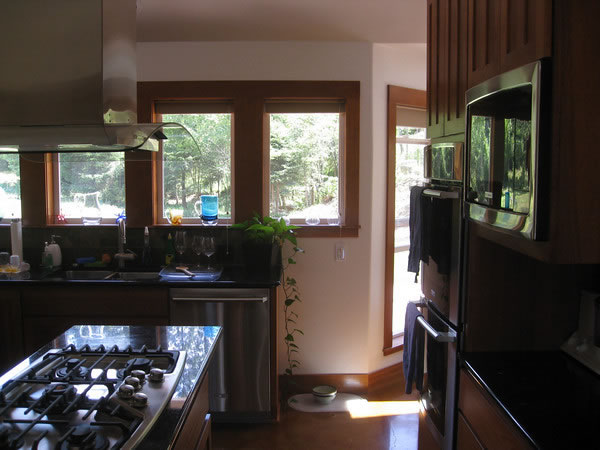 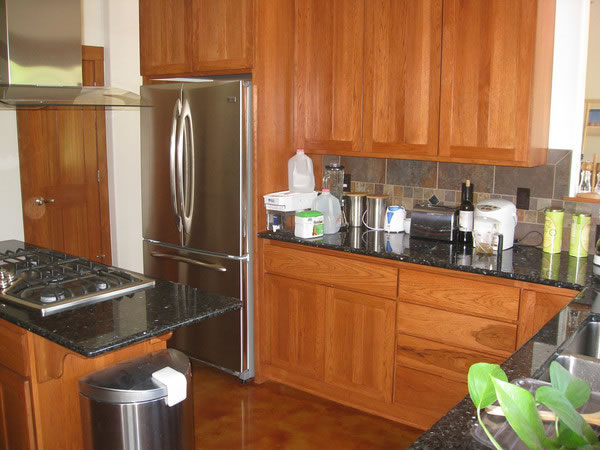 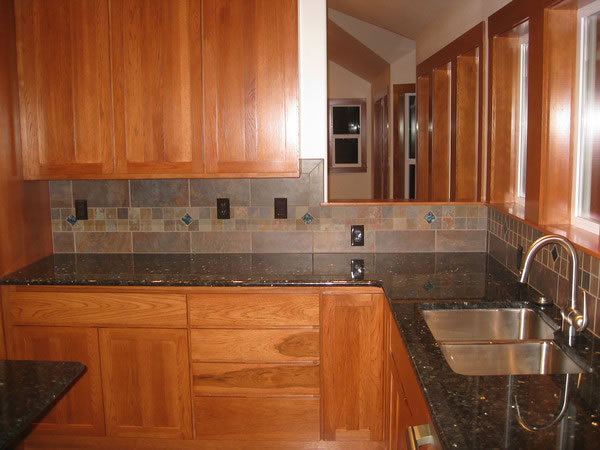 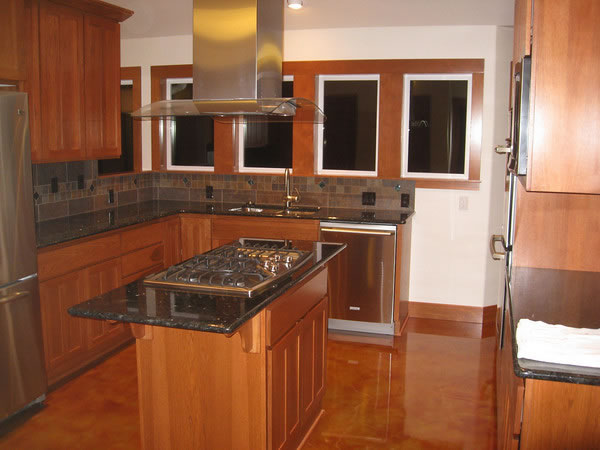 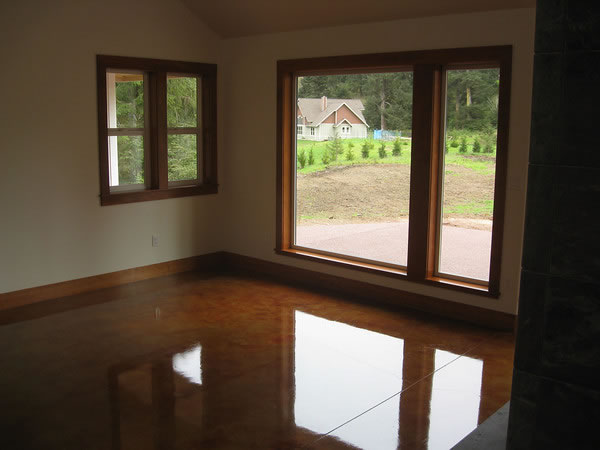 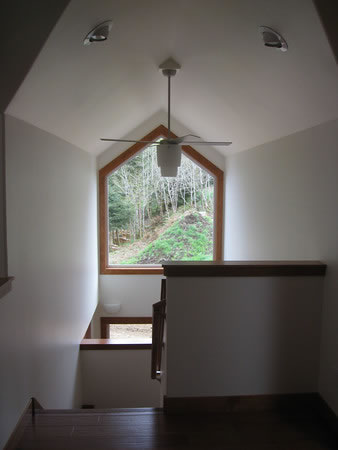 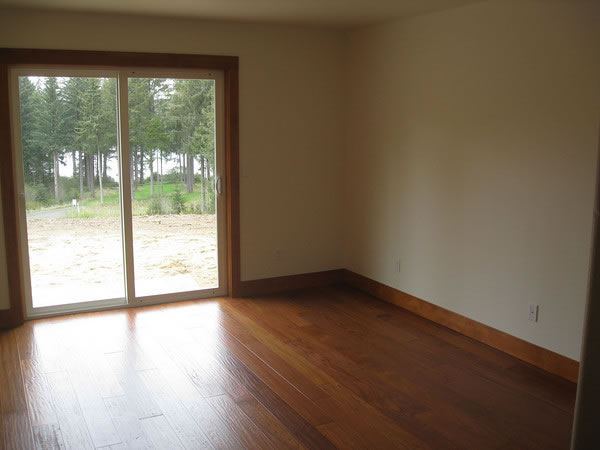 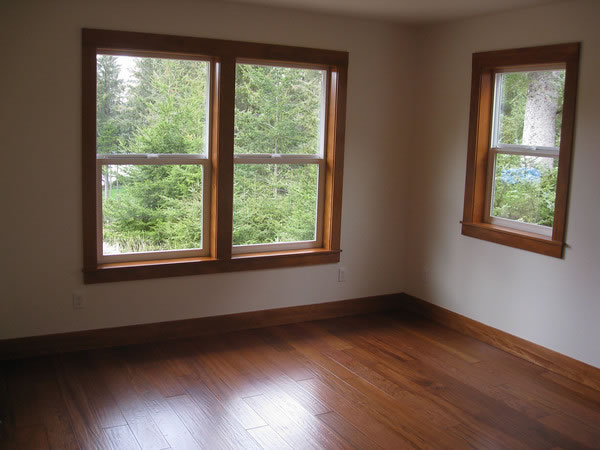 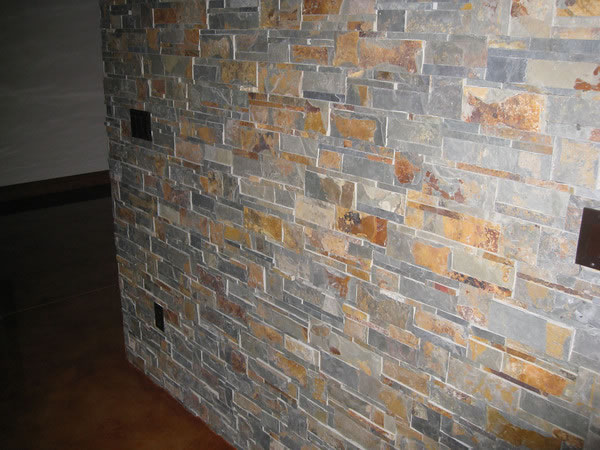 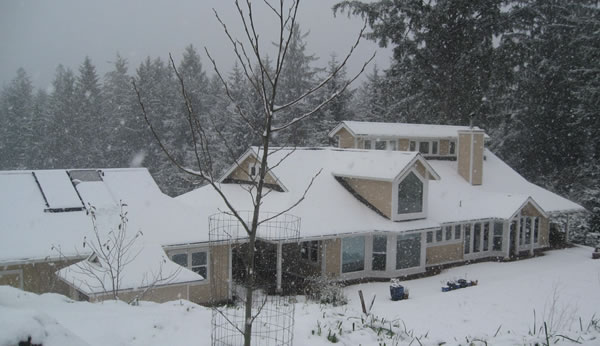 As you approach the house, what stands out are the dormer above the projecting bay of the nook with its rounded window and the clerestory windows running left to right. As you step onto the front patio, you're facing a three–sided bay with windows on either side, and the front door in the middle with a half–round transom window above it. When you enter the foyer there's an optional fireplace right in front of you that faces the living room to your right. The ceiling in the living room – like those in the dining room, kitchen and sunroom/den – vault steeply from 8' at the front of the house to a lofty 16' at the edge of the clerestory that projects from the roofline. And the outer wall along the entire front of the house is filled with windows. French doors in two corners of the living room open to the covered porch at the side of the house.

A wall separates the kitchen from the dining and living rooms, but the wall drops to 48" in height in one corner, allowing food and other items to be passed between the kitchen and dining room. The kitchen has room for a long rounded island with a range on top and a raised bar at one end. There's a built–in desk, plenty of counter and cabinet space, and a walk–in pantry nearby.

The breakfast nook off the kitchen is set into a bumped–out bay with 6–foot–tall windows, above which sits a dormer with a pie–slice transom over a picture window. The nook is also open to a sunroom that could of course be used as a den or library. A door at the end of the room opens to a family entry at the side of the house. This entry can act as an air–lock, and three more doors in this space open to a screened porch, a laundry room, and the main portion of the house. The screened porch has a door at one end that opens to a covered porch in the front corner, and another at the other end that opens to the rear patio. Pull–down stairs in the ceiling provide access to attic storage. The laundry room can also be accessed from the patio.

A hallway running left and right through the middle of the house provides access to the master suite. A recessed door opens to the master bedroom. At the far end of the room there's a sitting area in a bay of windows, and a glazed door that opens to the rear patio. An opening leads to a dressing area placed between the walk–in closet and a pair of separated vanities. A door off the dressing spaces opens directly to the laundry room. An opening between the sinks leads past a private toilet and a linen closet to a pocket door that opens to the bathing area. This space features a double shower across from a soaking tub with a pair of windows and a plant shelf between them. A truly unique and functional master bath!

A short angled hall off the living and dining areas leads to bedrooms 2 and 3 and the full bath they share. Both rooms have views to the rear, and the bathroom doubles as a guest powder room.

If you choose to develop the small upper level, the stair landing provides access to a study loft, a room that can be used as either a guest room with a private balcony or for storage, and a long balcony beneath the clerestory with built–in bookshelves along one side and a railing on the other that looks down to the living spaces below. If you do not develop the upper level, the unused stairwell space can add room to the kitchen, nook, and sunroom.

The plans include drawings for a two–car garage with a large workshop area. Pull–down stairs in the shop area provide access to attic storage. The garage is wide enough to accommodate 3 cars if you don't need a workshop. It can be located on the side, where its narrower side wall matches up with the screened porch, and its overhead doors can face either the front or rear of the house. Or it can be located in the rear, where the side wall matches up with the rear deck or patio. Again the rollup doors can be on either side.

There is another version of this house called Great Light & Views 2. Just click on the architect's name (in red, in the upper left corner of this page) – red links to each of her plans appear below her bio.

Side 1 Elevation For Great Light & Views

Side 2 Elevation For Great Light & Views

This distinctive home features a front patio that wraps around to a covered porch along the right side of the house, and both a covered porch and a screened porch along the entire left side that connects to a deck at the rear of the house. Truly a house for a family that like to spend a lot of time outdoors! All the living spaces of this home have vaulted ceilings and great views to the front, and a clerestory allows even more natural light to fill the house. If your property allows you to orient the front of the house to face south, you can take advantage of its passive solar design.